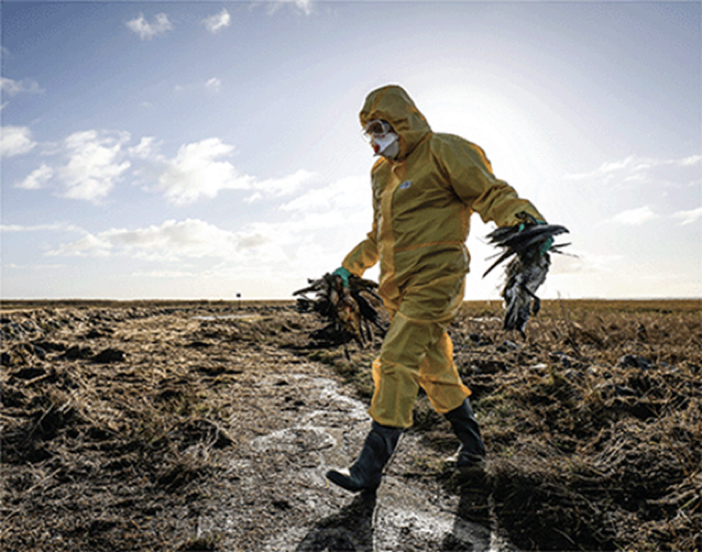 The first confirmed outbreak of highly pathogenic avian influenza virus (HPAIV) in birds was documented in Scotland in 1959 with the influenza A H5N1 subtype, although there have been numerous suspected HPAIV outbreaks documented globally since 1878. H5N1 and its genetic reassortants (including H5N2, H5N5, H5N6, and H5N8) have been found to cause thousands of outbreaks worldwide (1, 2) in both farmed poultry and wild birds, with massive mortality. The H5Ny HPAIVs are lethal to most farmed poultry, and culling is often used to prevent further spread. Several of the H5Ny AIVs have zoonotic and pandemic potential because they have been demonstrated to cross the species barrier, transmitting to mammals, including humans. Eurasia and Africa are experiencing a new wave of highly pathogenic H5Ny AIV outbreaks. The zoonotic potential of AIVs warrants continuous, vigilant monitoring to avert further spillovers that could result in disastrous pandemics.

Among the four types (A to D) of influenza viruses, type A tends to be zoonotic, and the natural hosts are regarded to be water birds. Influenza A virus is further divided into different subtypes according to the antigenicity of two viral glycoproteins: hemagglutinin (HA, of which there are 18 subtypes, H1 to H18) and neuraminidase (NA, of which there are 11 subtypes, N1 to N11); most HA-NA combinations in AIVs have been identified. AIVs evolve mainly through two major mechanisms: genetic drift from point mutation(s) and genetic exchange through reassortment of the segmented genomes. Both mechanisms can endow AIVs with new genetic characteristics (sometimes referred to as variants), which may affect transmissibility, pathogenicity, and even antigenicity.

Within a subtype, influenza viruses can be further classified into various clades and subclades generally on the basis of the similarity of the HA gene sequences. Scientists have proposed a unified nomenclature system to describe the constant evolution of the H5Ny AIVs on the basis of the phylogenetic characterization and sequence homology of their HA gene sequences. In this system, new clades and subclades can be designated when their average percentage pairwise nucleotide distances exceed 1.5% from known clades. These are defined as second-, third-, or fourth-order clades and assigned a numerical “address” that links them to their original clade. For example, within the distinct clade 2.1 of H5, third-order clades meeting the clade definition are designated as clades 2.1.1 and 2.1.2, and so on (see the figure).

The first described strain of the H5Ny HPAIV is referred to as A/Goose/Guangdong/1/1996 (H5N1), and it was identified in China in 1996 (1). Since then, the HA gene of the H5 subtype has evolved into various clades and subclades (3, 4), with the clade 2.3.4 gradually becoming dominant across the world since 2010. The H5N8 AIV clade 2.3.4 was first isolated from a domestic duck at a wet market in Jiangsu, China, in 2010. In early 2014, H5N8 AIVs of this clade caused outbreaks in domestic and wild birds in South Korea as well as in Japan. A routine surveillance study subsequently revealed that the South Korea–like H5N8 had already existed in domestic birds in Zhejiang, China, as early as November 2013. Clade 2.3.4 H5N8 AIVs were also identified in Russia and several other European countries and in the United States in late 2014. Additionally, an H5N2 virus that contained gene segments related to H5N8 was found in Canada in late 2014. A Bayesian phylogenetic analysis revealed that the introduction of H5Ny AIVs into North America from the Eurasian continent likely occurred through long-distance migratory birds entering by way of the Bering Strait flyway in August 2014 (5). In 2016, clade 2.3.4.4 H5N8 AIVs reemerged in China, Mongolia, Russia, Europe, and India. Therefore, clade 2.3.4 H5 AIVs, particularly the H5N8 subtype, have clearly displayed a propensity for rapid global spread in migratory birds.

The H5 subtype of avian influenza viruses can be phylogenetically subclassified into clades and subclades according to their sequence similarity to the hemagglutinin (HA) gene (numbers in circles). Several of the H5 clades have caused human infections, and in particular, clade 2.3.4.4b was circulating across Eurasia and Africa during 2020 and caused human infections in Russia.

The majority of the classified H5Ny clades and subclades have been reported to cause human infections, particularly the clade 2.3.4, with H5N1 (6) and H5N6 (7) subtypes implicated. To date, there have been a total of 862 laboratory-confirmed human cases of infection with H5N1 reported to the World Health Organization (WHO), including 455 deaths (8). These cases were from 17 countries, with ∼76% from Egypt and Indonesia. No sustained human-to-human transmission of H5N1 or H5N6 AIVs has been documented, despite the report of probable cases arising through close contact. However, gain-of-function studies have shown that H5N1 variants with a few specific mutations in the HA gene and seven other gene segments from the H1N1 human influenza virus (which caused a global pandemic in 2009) were able to transmit among laboratory animals through respiratory droplets, which is indicative of the pandemic potential of H5Ny AIVs (9, 10).

The constant evolution of H5Ny AIVs and their potential reassortment with AIVs of other subtypes clearly warrant close attention. According to nationwide AIV surveillance in China since 2014 (7, 11), H5N6 had supplanted H5N1 as the dominant circulating AIV subtype (particularly in duck species) in southern China over the 2014–2016 period. Conversely, H9N2 was the dominant subtype in birds sampled from northern China (7), which has also caused numerous human infections. The seroprevalence of antibodies specific to H9N2 among healthy poultry workers in some regions of China exceeded 10%. However, the AIV positivity rate in live poultry markets (LPMs) substantially decreased during 2016–2019 in most regions compared with data collected between 2014 and 2016 (26.90% versus 12.73%, respectively) (7, 11). Since its emergence in early 2013, H7N9 AIVs have caused 1568 laboratory-confirmed human cases, including 616 deaths. However, the positivity rate of H7N9 also substantially decreased between 2016 and 2019, and notably, H9N2 has replaced H5N6 and H7N9 as the dominant AIV subtype in both chickens and ducks across China. Furthermore, new reassortants and viral variants continued to emerge, including H7N3, H9N9, H9N6, and H5N6 subtypes. Almost all of the H9 AIVs and many H7N9 and H6N2 strains encode HAs that preferentially bind to the human α2,6–linked sialic acid cell receptor (11), suggesting an increased propensity for human infections. These results highlight the dynamic and complex AIV circulation patterns that are important for optimal selection of vaccine candidates and maximizing vaccine efficacy in birds.

Owing to the COVID-19 pandemic, prevention and control measures—including reduced mobility, increased use of masks, and enhanced social distancing and disinfection—have sharply reduced the global incidence of the seasonal human influenza A and B viruses (12). The influenza surveillance data, however, may be underestimated and should be interpreted with a degree of caution because the ongoing COVID-19 pandemic has influenced to varying extents health-seeking behaviors, laboratory staffing and routines in sentinel hospitals or centers for disease control and prevention, as well as testing priorities and capacities (12). Nonetheless, highly pathogenic H5Ny AIVs have caused frequent outbreaks in birds in several countries across the Eurasian and African continents since late 2019, especially during the winter season (2).

Highly pathogenic H5Ny AIVs—including H5N1, H5N2, H5N5, and H5N8 subtypes—resulted in ongoing outbreaks in both poultry and wild birds in Chinese Taipei throughout 2020. Highly pathogenic H5N8 AIV also caused continuous outbreaks in poultry in South Africa in 2020. Moreover, H5N8 caused numerous outbreaks in central and eastern Europe from January to early June 2020. In the autumn and winter of 2020, Eurasia experienced a sudden recurrence of H5N8 AIV, above other subtypes: In August 2020, H5N8 caused outbreaks in Russia in both poultry and wild fowl, and the affected regions extended to Kazakhstan in mid-September; in October 2020, a new wave of outbreaks of H5N8 in poultry and wild birds was reported in several European countries, including Denmark, Germany, Ireland, the Netherlands, and the United Kingdom. Meanwhile, in the Middle East (Israel) and East Asia (Japan and South Korea), H5N8 outbreaks arose in poultry and/or wild birds. To date, more than 20 million poultry have been slaughtered in South Korea and Japan, and phylogenetic analysis revealed that the causative agent belonged to clade 2.3.4.4b (13), a previously identified minor clade of H5Ny AIV (4, 13).

The affected geographic regions have been expanding continuously, and at least 46 countries have reported highly pathogenic H5N8 AIV outbreaks. In addition, the HA protein of these H5N8 AIVs harbors several amino acid substitutions of concern, including Thr160→Ala (T160A, H3 numbering), which has been reported to enhance the binding capacity to α-2,6 sialic acid receptors that are favored by human influenza viruses (14). The first human cases of H5N8 influenza virus infection were reported in Russia in December 2020: Seven poultry farm workers tested positive when they participated in a response operation to contain an H5N8 AIV outbreak (15). Phylogenetic analysis revealed that the H5N8 virus sequenced from the human cases also belonged to clade 2.3.4.4b of the H5 phylogeny. Therefore, the global spread of AIVs, particularly the H5N8 subtype, has become a major concern to poultry farming and wildlife security but, critically, also to global public health.

Because of the long-distance migration of wild birds, the innate capacity for reassortment of AIVs, the increased human-type receptor binding capability, and the constant antigenic variation of HPAIVs, it is imperative that the global spread and potential risk of H5N8 AIVs to poultry farming, avian wildlife, and global public health are not ignored. Therefore, surveillance of HPAIVs in poultry farms, LPMs, and wild birds should be restored to the level before the COVID-19 pandemic or higher. Further assessment of the transmissibility, pathogenicity, and antigenicity of 2.3.4.4b H5N8 is also required. If there is distinct antigenic variation, vaccines should be updated with the emergent HPAIVs. In addition, decreasing small-scale family-based poultry farming, increasing large-scale high-standard modern poultry farming, and enhanced management of LPMs will help reduce the spread of HPAIVs and potential human infections. Education and outreach are also important, including enhanced personal protection measures during the influenza season, keeping away from wild birds, and avoiding hunting and eating wild birds.

No comments to show.